Project for Public Spaces – Streets as Places from metroplanning

Climate Change Centre Reading
How can Reading / Thames Valley Berkshire become a role model in Climate Change? How can our leadership in in this very current area attract green businesses to the region? How do we form a strong sustainable community 2020-2050? These are questions the Climate Change Centre will deal with; and in doing so will help safeguard the future of our children;

1. Placemaking at a micro level
2. The Space we want
3. Research and theory of places 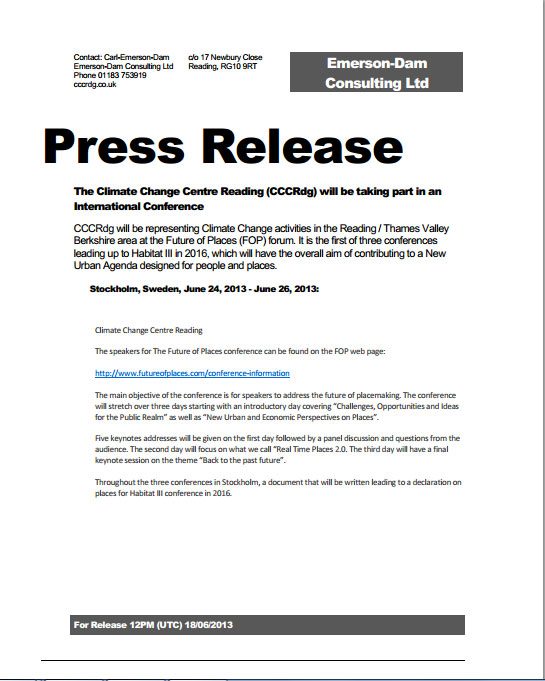 On June 24-26th, 2013, Placemaking leaders from around the world will gather together with UN officials, representatives from international government agencies, NGOs, designers, change-agents, mayors, local politicians, and other place-centered actors for The Future of Places. This will be the first of three linked conferences that will develop a ‘Future of Places Declaration’ to influence the discussion at the Habitat III gathering in 2016. The Royal Institute of Technology (KTH), School of Architecture and the Built Environment (Contact: Dr. Tigran Haas) is excited to be participating in the organization, as the Scientific Advisors (together with the University of Miami, School of Architecture, Contact: Dr. Charles C. Bohl) for this very special series of events; a partnership between the UN-Habitat, the Ax:son Johnson Foundation, which will host the event at the Stockholm City Conference Centre in Stockholm, Sweden and PPS (Project for Public Spaces) in New York City.

The agreement which led to this was penned in Nairobi and signed by the UN-Habitat
Executive Director, Dr. Joan Clos and Project Leader for Urban City Research, Peter Elmlund for the Ax:son Johnson Foundation, a guest research fellow in residence at KTH (The Royal Institute of Technology). This Memorandum of Understanding (MoU) forms a partnership with an outcome of creating a series of three conferences in the lead up to Habitat III, with a special emphasis on Public Space and Placemaking. The planned conference series will see the first two being held in Stockholm while the final one has been proposed for Nairobi in 2015. The conference series aims to shift the focus from objects to places, with an emphasis on functionality. Key highlights of the partnership are: that it would form a long term agreement beyond Habitat III, that there is a new aim to target and influence decision makers, and that there is an aim to create people-centered cities.

The conference begins with the premise that the world is at a crossroads, we have a choice: cities can continue to grow haphazardly, without regard to human social needs and environmental consequences, or we can embrace a sustainable and equitable process that builds community, enhances quality of life, and creates safe and prosperous neighborhoods. We are convinced that in the future, the cities that utilize the social capital-building potential of their public spaces to the fullest will be the ones with the most dynamic local economies. The Future of Places will survey the field, and map out a path to a more people-centered urban development model for the globalized future.

Habitat III, the third United Nations (UN) conference to be held on Human Settlements, will
bring together actors from across the globe, including local governments, national
governments, the private sector, international organizations, and many others. This gathering, the largest of its kind in the world, will build on the first Habitat conference in Vancouver in 1976 and the Habitat II conference in Istanbul in 1996. The conference will re-evaluate the Habitat agenda and look at the role of UN-Habitat and sustainable urban development in the upcoming decade. It is therefore vital that the dialogue that will influence the Habitat III outcomes—and thus the future global urban agenda—commences today.

The Royal Institute of Technology (KTH) has also become a UN Habitat Partner University with the ABE – School of Architecture and the Built Environment as its nexus of future activities. Contact Persons for this important partnership and collaboration are Professor Alexis Pontvik and Dr. Tigran Haas from the same school. For more information on the Stockholm Placemaking Conferences please contact Dr. Tigran Haas at: tigran@kth.se

People & Planet’s Green League is the only comprehensive and independent league table of UK universities ranked by environmental and ethical performance. It is compiled annually by the UK’s largest student campaigning network, People & Planet.

In Copenhagen, the capital of Denmark, millions of Honey bees are working hard for the city. These busy employees provide not only delicious honey to city people, but a blooming environment in the parks and greens around the capital.

The Environmental Atlas of Europe is a UNEP-EEA-ESA joint project showcasing communities responding to environmental change across Europe. Watch the films here;
http://www.eea.europa.eu/atlas/eea/