On behalf of Climate Change Centre Reading, I urge you to watch this, Top video of what is happening now with the planet featuring Professor Paul Beckwith, who was in Peru in Dec. 2014 at the UN Climate Change Conference with the Arctic Methane Emergency Group. Now methane is being released in record amounts from various places around the planet. #climatechange #methane #abruptclimatechange Every day more and more people are waking up to climate change. What scientists predicted decades ago is happening right now. And we have little time left to advert catastrophe. But those in power have not yet woken up, or are unwilling to act.

On March 7th, two months before the election, we will take to the streets of London in a creative mass action. We will set out clearly what must happen now to cut emissions and build a better future. No more half-hearted promises: it´s Time to Act on Climate change.

2015 is a crucial year for the climate. in the UK, we must tell politicians seeking election that there is no mandate for climate-wrecking business as usual. Then at UN talks in Paris in December, governments will come together to strike a deal for the climate.

Our future is at stake.

Find out how you can help:
www.campaigncc.org

A recent mobility survey carried out by the City Planning Department in Helsinki has revealed that on a weekday 34% of citizens walk and 32% use public transport. The survey results found that many people are now choosing to travel on foot or by public transport instead of taking their cars. 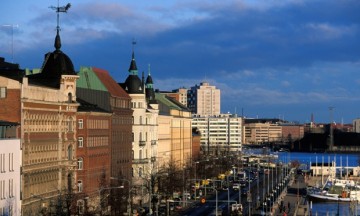 Researchers found that females between the ages of 7-17 traveled most often with an average of four trips a day. People over 65 were found to make more than two trips over the same period. On average, Helsinkians make three trips a day. The survey also revealed that middle-aged females preferred to use public transport compared to males, who were twice as likely to use a car to travel into the city.

The survey took place in September and October 2014 and 3,000 city residents were interviewed. The results of this survey reveal that only 22% people travel by car, down from 27% in 2010.

In May 2006, Helsinki was one of 15 European cities with a green vision. Its green vision was turned into a joint Memorandum which established the European Green Capital Award which rewards environmentally friendly urban living. Cities must encourage their citizens to change their travel behaviour and try alternatives to the car such as cycling, walking and public transport. Efficient urban transport is fundamental to citizens’ quality of life and to economic development.