The highly developed industrialized nations’ responsibility to combat climate change is obvious and cannot be overestimated. Similar to the issue of sustainable consumption and production patterns, the rich countries need to become leading examples if the goal of combating climate change and its consequences is not to remain mere lip service. Effectively reducing CO2 and other greenhouse gas emissions is imperative in this regard. The data displayed in figures 13.1 and 13.2 show how far many OECD countries are still lagging behind compared to the respective benchmark countries of the sample. 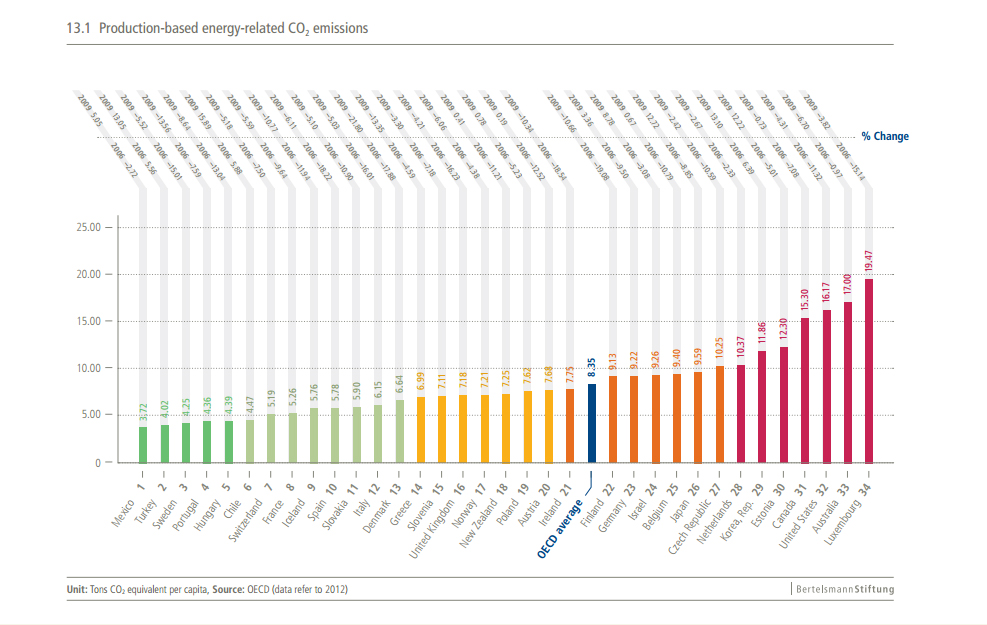 Figure 13.1 provides information on production-based CO2 emissions per capita. “Production-based” means that emissions refer to gross direct CO2 emissions from fossil fuel combustion, emitted within the national territory excluding bunkers, sinks, and indirect effects. In the fi ve leading countries, Mexico, Turkey, Sweden, Portugal, and Hungary, as well as in sixth-ranked Chile, production based CO2 emissions are below 5 tons per capita. These countries’ performances stand in stark contrast to the respective emission levels of countries placed at the bottom of the list, such as Canada, the United States, Australia, and Luxembourg. Here, CO2 emissions range from 15.3 (Canada) to 19.47 tons per capita (Luxembourg). 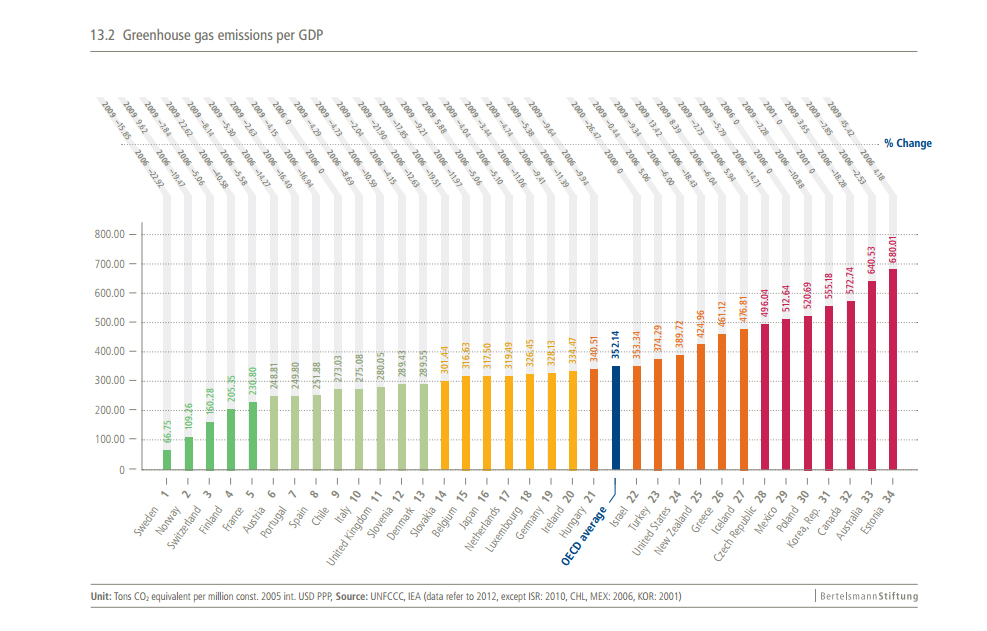 The second snapshot indicator links emission levels to the size of a country’s economy, and refers to total greenhouse gas emissions per GDP. Greenhouse gas emissions include land use, land-use change, and forestry, and are measured in CO2 equivalents as a percentage of GDP (tons per million constant 2005 int. USD PPP). The findings are remarkable: While Sweden is by far the top-performing country with an amount of 66.75 tons, Estonia comes in last place with 680 tons – more than ten times as much as in the case of the leading country. Moreover, Sweden is the only country ranked among the top five on both indicators chosen here.

With regard to greenhouse gas emissions per GDP, Norway, Switzerland, Finland, and France follow in places two to five. In fifth-ranked France, however, emissions are already nearly four times as high as in Sweden. At the negative end of the spectrum, Canada and Australia again find themselves in the bottom group. Australia’s greenhouse gas emissions per GDP amount to 641 tons, which means that the country ranks second to last on both indicators of goal 13.