A new report has established that cities now contribute to 37-49% of global greenhouse gas emissions. The report also reveals that urban infrastructure accounts for over 70% of global energy consumption. 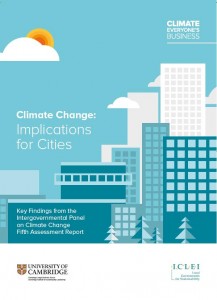 • Many emerging climate change risks are concentrated in urban areas.

• The world’s urban population is forecast to almost double by 2050, increasing the number of people and assets exposed to climate change risks.

According to ICLEI President David Cadman, “This Cities Summary succinctly summarises the key implications for urban areas. It is a must read for all local decision-makers”. The report was published jointly by The University of Cambridge’s Institute for Sustainability Leadership and Judge Business School and ICLEI with the support of the European Climate Foundation.

The European Commission has long recognised the important role that local authorities play in improving the environment, and the significance of their high level of commitment to genuine progress. The European Green Capital Award has been conceived as an initiative to promote and reward these efforts.Bristol, European Green Capital 2015 has demonstrated a long term commitment to improving its urban environment. The city has been working since 2000 to reduce its contribution to climate change by developing and delivering a series of strategies and action plans, such as the Bristol Climate Protection and Sustainable Energy Strategy and the Local Transport Plan to 2026.