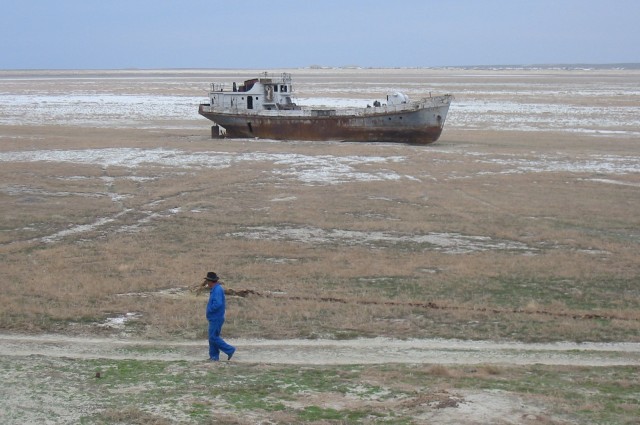 Photo credit: Staecker. The demise of the Aral sea could be a foretaste of the future if we don’t change the way society works

Our industrial civilization faces the same threats of collapse that earlier versions such as the Mayans experienced, a study to be published in Ecological Economics has warned. The idea is far from new, but the authors have put new rigor to the study of how so many previous societies collapsed, and why ours could follow.

Lead author Mr Safa Motesharrei is no wild-eyed conspiracy theorist. Motesharrei is a graduate student in mathematics at the National Socio-Environmental Synthesis Center, a National Science Foundation-supported institution, and the research was done with funding from NASA’s Goddard Space Flight Center.

“The fall of the Roman Empire, and the equally (if not more) advanced Han, Mauryan, and Gupta Empires, as well as so many advanced Mesopotamian Empires, are all testimony to the fact that advanced, sophisticated, complex, and creative civilizations can be both fragile and impermanent,” the forthcoming paper states

Two key social features are identified that contributed to the collapse of every civilization studied: “The stretching of resources due to the strain placed on the ecological carrying capacity,” and “The economic stratification of society into Elites [rich] and Masses (or “Commoners”) [poor]”.

If these look familiar, so do the factors that make up the resource side of the equation, with climatic change, and scarcity of water and energy key among them, although for others climate variation was a matter of bad luck, rather than their own actions.

The model Motesharrei used, Human And Nature Dynamics (HANDY), explores the relationship between population and resources, drawing heavily on predator-prey models used by ecologists. Four key factors were included in the model: Elites, Commoners, nature and wealth. Equations of how these interact were created with varying inputs. The outcomes were not pretty. The timing and shape of collapses varied, but the societies that most closely resembled our own doomed themselves, through overuse of resources exacerbated by economic stratification.

In one scenario many commoners do make it into the elite population at year 750, but the “scarcity of workers” caused a collapse by year 1000. In another so many of the Earth’s resources are consumed that society, and the ecology of the planet, are doomed by the year 500.

“It is important to note that in both of these scenarios, the Elites — due to their wealth — do not suffer the detrimental effects of the environmental collapse until much later than the Commoners,” the paper notes.

If those year numbers seem comfortingly far off, be aware that the year zero in these models is well behind us. Nevertheless, contrary to much of the reporting, the model does not provide a useful timeline for when we can expect to see the world we live in turn into something that resembles a post-apocalyptic nightmare, although studies of the convergence of climate and resource challenges suggest we may witness drastic food crises within a little over a decade.

In every economic bubble people looking back to past crashes are told “this time it is different”. Certainly some things have changed for modern civilization compared to the others Motesharrei has looked at. Technological developments that provide access to greater resources is the most frequently mentioned difference. Motesharrei responds, “Technological change can raise the efficiency of resource use, but it also tends to raise both per capita resource consumption and the scale of resource extraction, so that, absent policy effects, the increases in consumption often compensate for the increased efficiency of resource use.”

One advantage we do have, however, is much greater knowledge of what has gone wrong in the past, and therefore the capacity to build models like HANDY. In a presentation of an earlier draft of this work in 2012 Motesharrei noted, “Simple models provide a great intuition and can teach us invaluable points. It is crucial to have a measure that can give us an early warning of collapse. Carrying Capacity tells us when overshoot happens, and this can be defined by noticing the decline in wealth.”

Some coverage of the announcement has described disaster as inevitable, but that is not the paper’s conclusion at all. “Collapse can be avoided and population can reach equilibrium if the per capita rate of depletion of nature is reduced to a sustainable level, and if resources are distributed in a reasonably equitable fashion,” it argues.

Although the study has reportedly passed peer review it is yet to be published. It received global attention after a pre-release version was provided to The Guardian.

Update: NASA has issued a clarification stressing that this study does not necessarily represent NASA’s viewpoint. Noting that they fund many studies they stress it “was not solicited, directed or reviewed by NASA”. The funding came about because the project was “utilizing research tools developed for a separate NASA activity.” The clarification points out, “As is the case with all independent research, the views and conclusions in the paper are those of the authors alone.”

via According To A Nasa Funded Study, We’re Pretty Much Screwed | I Fucking Love Science.