Expecting the Paris talks to succeed is a pious hope: but the Oslo principles, launched today, argue that governments are already in flagrant breach of their legal obligations to the planet 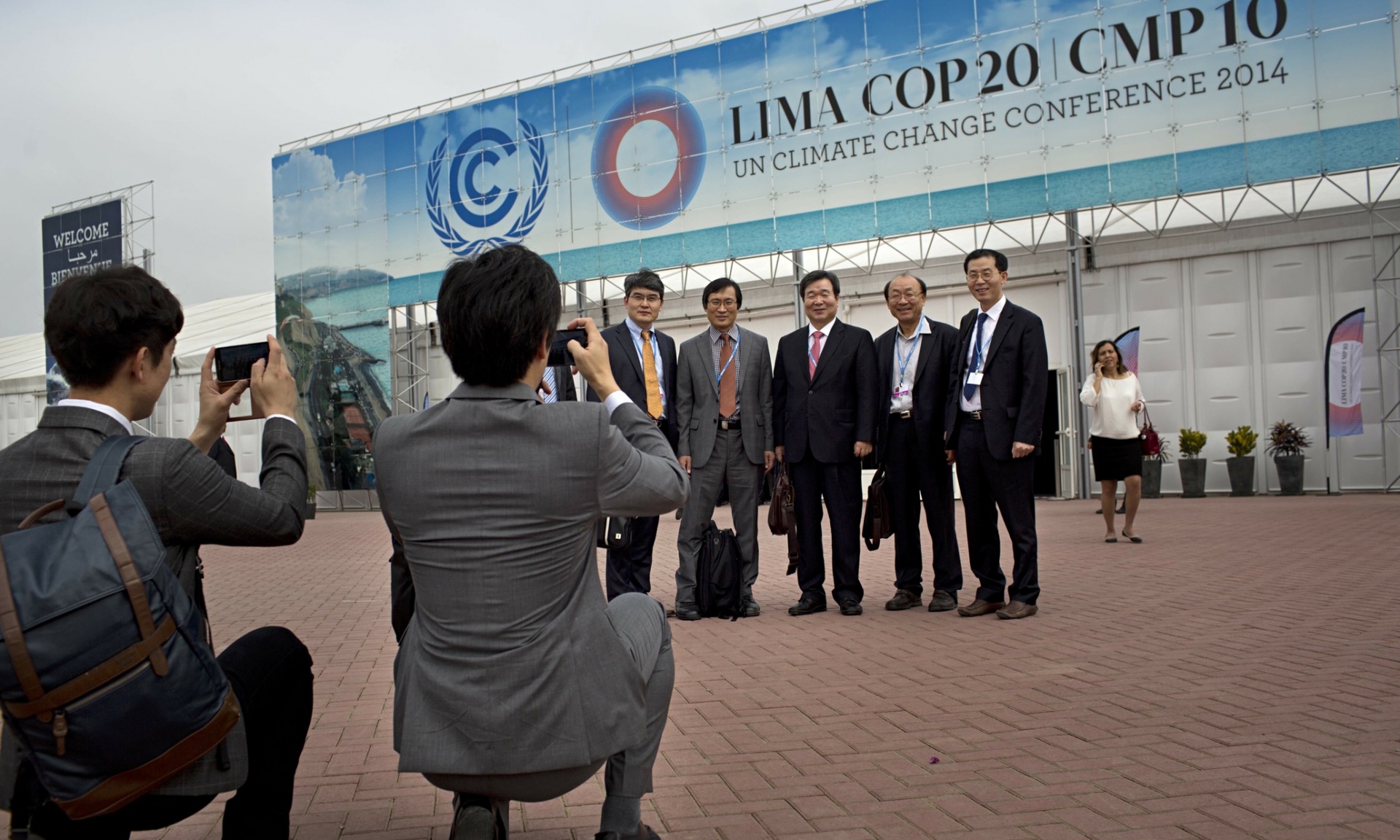 ‘The dismal pace of international negotiations is why the Guardian has thrown its weight behind a divestment campaign.’ The South Korea delegation are all smiles at the 2014 UN climate change conference in Peru, intended to produce a draft deal to be adopted in Paris in December. Photograph: Rodrigo Abd/AP

Today a group of eminent jurists accuse governments and enterprises of being in clear and flagrant breach of their legal obligations on climate change – under human rights law, international law, environmental law, and tort law.

Human ravaging of our planet and climate through relentless fossil fuel extraction and greenhouse gas emissions is undoubtedly the defining existential challenge of our time. Our collective failure to commit to meaningful reductions in emissions is a political and moral travesty, with catastrophic implications, particularly for the poorest and most marginalised, domestically and globally.

The dismal pace of international negotiations – and the prospect of yet more disappointment at the UN Paris conference in December – is why the Guardian has thrown its weight behind a divestment campaign, pressurising moral investors to take a stand against those responsible for the greatest emissions. After all, two-thirds of all greenhouse emissions come from just 90 coal, oil and gas companies.

But in the Oslo Principles on Global Climate Change Obligations – launching in London today – a working group of current and ex-judges, advocates and professors, drawn from each region of the world, argue that any new international agreement will just be a coda to obligations already present, pressing and unavoidable in existing law.

What the Oslo principles offer is a solution to our infuriating impasse in which governments – especially those from developed nations, responsible for 70% of the world’s emissions between 1890 and 2007 – are in effect saying: “We all agree that something needs to be done, but we cannot agree on who has to do what and how much. In the absence of any such agreement, we have no obligation to do anything.” The Oslo principles bring a battery of legal arguments to dispute and disarm that second claim. In essence, the working group asserts that governments are violating their legal duties if they each act in a way that, collectively, is known to lead to grave harms.

Governments will retort that they cannot know their obligations to reduce emissions in the absence of an international agreement. The working group’s response is that they can know this, already, and with sufficient precision.

There is a clear answer to the question of each country’s reasonable share, based on a permissible quantum of emissions per capita that never threatens the perilous 2C mean temperature increase that would profoundly and irreversibly affect all life on earth. This reasonable share is what nations owe on the basis of their common but differentiated responsibilities for contributing to climate change. The Oslo principles duly incorporate mechanisms to accommodate the differential impacts and demands on nations and enterprises, particularly in the least developed countries.

Backed by distinguished international lawyers, professors and judges, the principles are a template for courts, advocates and lawmakers to act swiftly, embodying the urgency, conviction and black-letter reasoning required if humanity is to turn the corner before it is too late.

The document is the product of an independent, rigorous, multi-year effort led by Yale University’s Professor Thomas Pogge, and Jaap Spier, the advocate-general of the Netherlands supreme court. It is championed by, among others, Antonio Benjamin, the Brazilian high court justice; Michael Kirby, a former Australian high court justice; Dinah Shelton, a former president of the inter-American commission on human rights; and Elisabeth Steiner, a judge at the European court of human rights.

These principles deserve detailed consideration by lawyers, scientists, advocates and – critically – the policymakers engaged in last-ditch negotiations in Paris in December to divert us from the path towards climate catastrophe. They provide some opinio juris that allows judges to prohibit conduct that, practised by many or all states, will cause enormous damage to people and the planet.

But the working group’s core message is that we simply cannot wait in the pious hope that short-term-minded governments and enterprises will save us; and that when we act it must be on the basis of equity and justice, according to law. Every year that we miss increases the challenge and risk. We’ve squandered decades already, and our window for action is closing. We must act now.