Last month there was agreement by the Liberal Democrats, Labour and Conservatives to act on climate change irrespective of the result of the election, the pact is here :

Given the national climate change pact we would hope that our local leaders, irrespective of political party, will support the motion and a post-carbon agenda for Berkshire and ensure that dealing with climate change is a high priority now and beyond the election.

Please help support this motion by sharing widely and writing to your local political representatives to encourage their support. Open the Motion in .pdf-format here 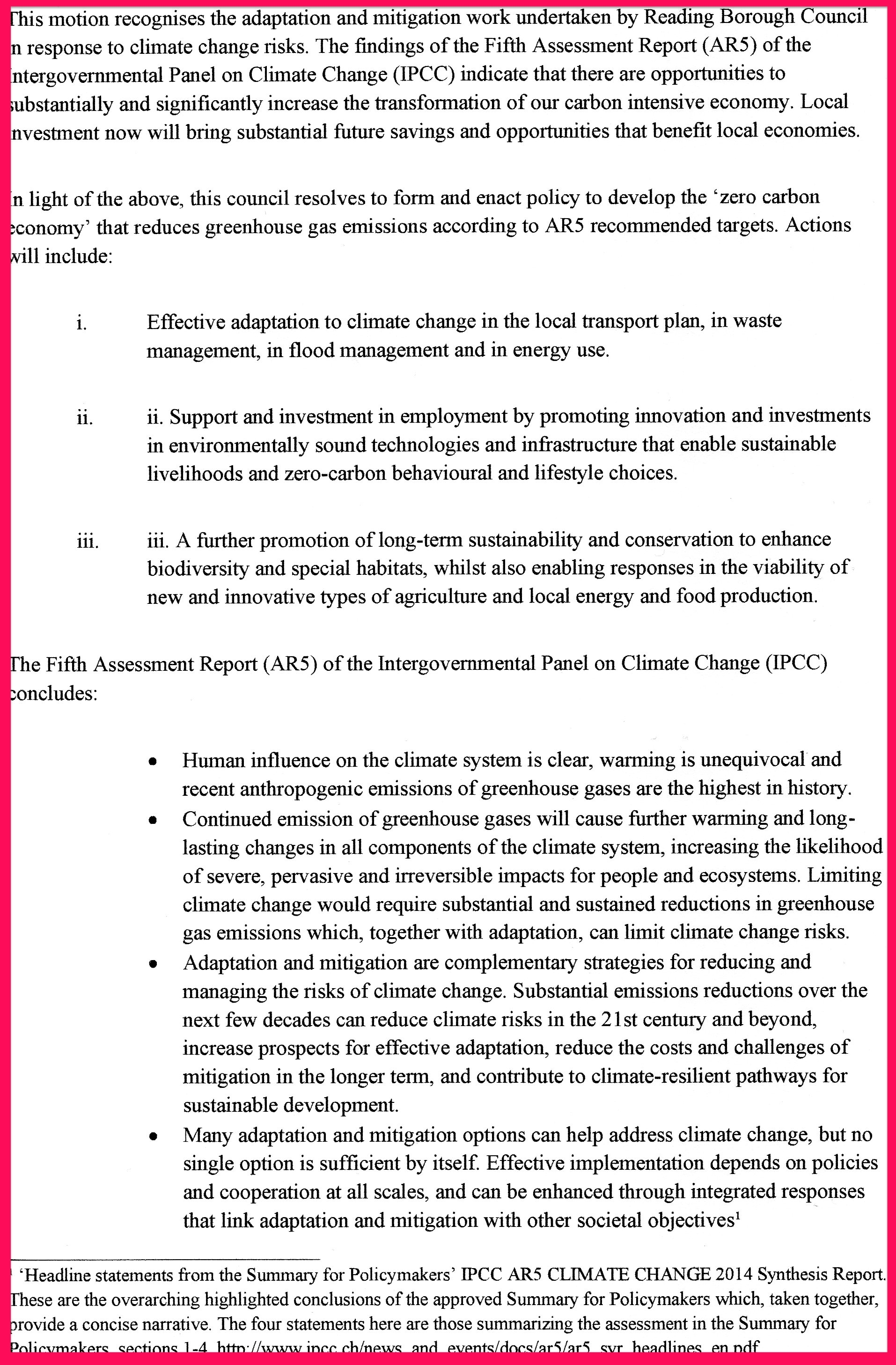 After a record turn out during the international Climate Marches on 21st September, where 410,000 turned out in New York, 20.000 in London and 700,000 globally, an update on climate progress seems appropriate.

This week the world received another vital report from a large number of the world’s leading scientific experts on climate change – a report accepted by the UK government.

The scale of the expertise on this report alone extends to the involvement of scientific experts from 85 countries with 800 authors and thousands of reviewers completing comprehensive reviews on over 30,000 peer-reviewed scientific papers on all aspects of climate change.

The 40th meeting on the issue by the IPCC assembled the Synthesis Report on the most recent findings, predictions and interpretations of data. This is no superficial institutional presentation but one which took six years of intense scientific study.

The report clearly tells us:

• The atmosphere and oceans have warmed, snow and ice reduced, sea level has risen, the oceans have become more acidic and extreme weather events have intensified.

• Without substantial and sustained reduction in carbon emissions global temperatures by the end of the 21st century could be more than 4 °C above pre-industrial levels.

• A change of that size would very likely lead to severe, pervasive, and irreversible impacts on societies and the environment globally.
• Snow, ice, permafrost and glaciers are melting at the poles and globally.

• The oceans are becoming increasingly acidic.

• Trees and forests are dying back, corals declining, and animals have shifted from their natural habitats.

• Man-made emissions of greenhouse gases have risen enormously since the industrial revolution; CO2 levels are now at their highest in at least the last 800,000 years.

• Much of this rise in emissions has occurred in the last 40 years, with current emissions the highest in human history.

• The ocean will continue to warm and acidify, negatively affecting marine wildlife and fisheries.

• Food security will be undermined as changes in the oceans affect fisheries and drought and rising temperatures reduce global crops yields.

• Climate change will amplify existing risks and create new risks for natural and human systems. Continued high emissions would lead to mostly negative impacts for biodiversity, ecosystem services, and economic development and amplify risks for livelihoods and for food and human security.

• This means we need total human emissions of CO2 to remain less than 2900 GtCO2. We have already emitted 1900 GtCO2, which is about two thirds of this limit.

• The longer we delay action, the harder and incredibly more expensive it will be.

• The Synthesis Report provides a strengthened case for international leaders to act now to reduce domestic carbon emissions and to secure an ambitious legally binding global agreement in 2015.

We need to heed the scientific advice. It is the IPCC professionals – who have often dedicated their whole lives to understanding the complex science of our finely balanced ecosystems and atmosphere – whose advice we should act upon.
Fortunately many politicians are sensible enough to know when they too need to take advice on policy-making from the right experts and so most align with the IPCC recommendations to some extent. Yet some of our UK politicians claim to know more than all those IPCC experts put together! How absurd that we give them the time of day, when they put our world at risk by hindering and delaying action to reduce CO2(e).

As Prince Charles adequately put it: “we should compare the planet under threat of climate change to a sick patient. No doctor would wait for 100% certainty whilst a dying patient slipped away.” In this scenario the doctors are the IPCC, who have over 95% certainty, and just as a doctor would not ignore the symptoms before something irreversible happens neither should we – we must act now.

We have the UNFCCC process, which is trying to stimulate this action, and next year in Paris the international community are supposed to stay true to their words and sign a legally binding deal – as was promised by all countries in 2011 at the UNFCCC Durban conference.

Yet, despite the report, alarmingly, there is now talk of a legally binding deal being unlikely and, instead, an “agreement” between nations and businesses to be the result of Paris (COP21 meeting)! This is disastrous because it is exactly what the fossil fuel industry wants. It is the same old game that large fossil fuel businesses play, where they will say the right things in an agreement and later, if a country has no legal deal (i.e. no repercussions if they don’t lower emissions), keep selling us fossil fuels instead of massively scaling up the alternatives needed to reduce CO2(e).

Time and time again people in political power tell us privately that large business has too much power and influence over politicians. Politicians need to have more courage and moral conviction – to stop being afraid of the consequences of upsetting large energy businesses and take the human power back into politicians’ hands – so that they can regulate our carbon. We need brave steps to be taken, steps which may cause disruption and pain but steps which will stop the patient from dying – in Prince Charles’s analogy.

As the UN Secretary General, Ban Ki-moon said at the IPCC press conference, “We are at a very historic and crucially important time for humanity. Science has spoken, there is no ambiguity in the message, leaders must act, time is not on our side. There is no plan B because there is no planet B.” He went on to reiterate: “Massive, urgent and immediate action are needed, we have to mobilise all financial resources. We need everybody, even individual citizens to take action.”
Dr Rajendra Pachauri, IPCC chair stated “ Climate change will leave no parts of the world untouched by the impacts…It’s very clear that to avoid the chaos of runaway climate change we need to dramatically reduce global emissions of greenhouse gases… The scientific community has now spoken and we are passing on the baton to politicians… The window of action is really closing very rapidly. We have a very short window of opportunity. Business as usual is certainly not an option. We need substantial and sustained reductions in greenhouse gases and adaptation. The costs will go up enormously if we delay action. The cost of inaction will be horrendously higher than the cost of action…We need to ensure that this message given by scientists is heard, not only by governments, but by business leaders and civil society, research and academia. The task we face must engage all stakeholders.

We cannot wait any further, we must act now, we have plenty of options available today that are economically viable. We need to start moving as quickly as possible. The costs of inaction are enormous and cannot even be quantified.

Finally, commenting on the report, Secretary General of the World Meteorological Office, Michel Jarraud stated “Now we are the point where excuses used for inaction are no longer valid. Ignorance can no longer be used as an excuse for inaction. The knowledge is there.”

We, all of us, from all walks of life must heed these clear words from our scientists and take action. Please write to your local MP and urge them to tell Ed Davey and David Cameron to squash any talk of opting out of a legally binding agreement at COP21. They can do this easily at the UNFCCC COP20 meeting in Peru in a few weeks. Tell MPs to pull together and make an international statement to honour their 2011 promise of a legally binding deal and in so doing “nip in the bud” any talk of “agreements” resulting instead of a deal. Non-binding agreements are what ill-intentioned business wants and are not in our national or international interest as they will fail to deliver the CO(e) reductions needed to cap global warming within a limit which will prevent catastrophic and irreversible consequences.

Do you not think you owe it to your children to understand and act on the danger we are collectively placing in their lives?

We are at an important point in human history. We have made huge material progress in recent decades, and also huge scientific advances. The science of climate change is now unequivocal – we face a profound threat to life on Earth as we have known it hitherto: threats to our weather, to our food supplies on land, to the seas, to our landscape, and to other species. Changes to the climate are now being noticed by ordinary people every day. We have fifteen years left in which to radically cut our emissions of CO2.

In the past, commonly held traditional, philosophical or religious beliefs of all kinds helped to prevent people from doing things that would damage their surroundings: there were restraints on exploiting the Earth or Nature, there were obligations to earlier generations or to descendants. We need to regain that sense of duty and obligation. To be free of responsibility, if it means damaging the next generation, is no freedom at all.

Independent nation states hold the key to stopping climate change. But they usually act only for themselves, even though they have shared interests. But under pressure from their citizens they may be persuaded to find a way to work together. They have done little so far and now time has run out.

We citizens have been quiet. We have come to live cut off from our surroundings, and from the Earth itself and its atmosphere. The Earth has been treated as a tip.

We know deep down, though, that all of nature is interconnected and that the web of life can be fragile. We can, if we have the will, regain the sense that we are part of a greater whole, that we have to live in harmony with other life and that we depend on it. And we can act on that. We have the great human capacity to co-operate. There are great challenges ahead, but we have the ability to cope with them.

The actions required for cutting emissions and installing clean energy are well known. The technology is there. We need only stop dithering and set off down the path. Otherwise our children will have to do it, and in far worse circumstances.

Let us start near home, in our own county. BerksCAN’s purpose is to help the community understand the issues and to take steps along the path that inevitably must be taken. 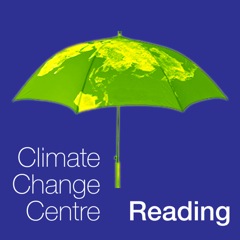 Your elected representatives have a moral duty of care to protect the community and your children. Are your elected representatives fulfilling their duty of care? Do they understand the gravity of the scientific advice being given to them? Are they acting on your behalf? Are they voting for action? Are they putting pressure on national government to acknowledge the threat and strongly respond on your behalf?

Carbon emissions are rising not falling. Its clear that many of your representatives are not acting in the interest of current and future generations to protect from the damaging effects of climate change. BerksCAN!’s view is that this is immoral, unjust and reprehensible and must change as per the scientific advice given to them. We cannot condemn current and future generations to the clear growing danger that is becoming increasingly evident.

The community must respond and demand action commensurate with the scientific knowledge to face up to this issue Write to your representative. Let BerksCAN! know the response.